How precious is your time? Do you value it like you value your money? No? Then stop reading because procrastination is JUST FOR YOU! If you do value your time, then keep reading.

So let’s break this procrastination thing down.

Procrastination is the action of delaying or postponing something, usually because it’s either an undesirable task or a difficult one, but sometimes because of distraction. No matter what the cause, something is keeping you from doing what you’re supposed to do.

The War on Procrastination is ongoing and will never end as long as you have a To-Do list. There will always be an excuse to keep you from getting things done, so the best way to attack it is one battle at a time. Before you go into battle, you must do a little research, or soul searching first.

You know yourself better than anyone else. Whether you want to admit your flaws or not, you know your likes and dislikes, and that’s what is being used against you in the Procrastination War. So the best way to defend yourself from procrastination is to know yourself, because “Just Do It” is just a slogan, not a strategic plan.

Even if you know what you’re capable of and you believe you have maximum mental cosmic strength, willpower is not reliable. If it were, the war would be over, and you wouldn’t be reading this!

All of these things can change at any time. Think about the last thing you had to do, but you didn’t want to do. Did you use willpower? Did you procrastinate? Or was it a little bit of both? It’s not easy to do, is it?

Of course, there are many different ways to do this, but I’m going to tell you about what works for me. I also won’t go into distractions because that’s a very personal thing that only you can control. I would, however, suggest that you recognize your distractions and limit them as much as possible. 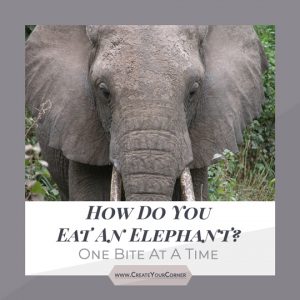 Everyone knows that to eat an elephant you take one bite at a time, but what happens to the elephant while you’re taking those bites? Not sure? Replace the elephant with a fish of the same size.

Now you get it. It smells. It smells so awful that you don’t even want to go NEAR it, much less eat it! That’s what leads to procrastination. That brings me to another wise saying that everyone has heard at some point in their lives.

Don’t bite off more than you can chew.

In other words, if you know you can’t handle eating all of an elephant before it starts to smell, then why even attempt it? Of course, there will be times when there won’t be any choice but to tackle the elephant, and in those times I’d highly recommend not doing it alone. When you work with someone else, it’s hard to procrastinate because you’re holding each other accountable.

When you have an undesirable thing to do, consider breaking it up into manageable sections, so it doesn’t seem so bad. 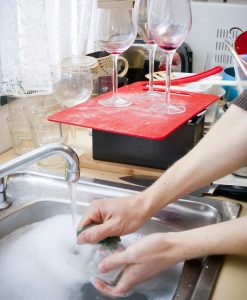 After throwing a birthday party in your home, the place is a mess, especially in the kitchen. You’re exhausted and decide to wait until the morning to clean up (which is completely understandable!). The next morning you get up and immediately remember that your home is in shambles. Now what?

In this example, you gave yourself a break and tackled the worst room first (not to mention you saved yourself some money!). The break was the key component in avoiding procrastination in this example. Self-care is vital to getting anything done. If you aren’t well rested, you will make mistakes that can end up being costly. Imagine trying to clean while being tired and frustrated. You’d never have another party again! By getting your rest first, you’re able to think clearly and make better decisions. Now, I wouldn’t suggest going for a massage after going out for breakfast because that would definitely be procrastination!

Tackling the worst room is also an important part of avoiding procrastination. When there’s a list of things to do, people tend to do all of the desirable things first, and then leave the undesirable things for last. That’s right, another form of procrastinating. By doing the hardest thing first, you’re rewarding yourself with the more manageable tasks!

Make a list of the things that distract you and the excuses you like to use to avoid doing what you need to do. Post it somewhere prominent so you’ll be able to know when you’re procrastinating and redirect yourself.

Thank You For Your Support!

If you've been blessed by me and you'd like to say thank you, please tell a friend! If you'd like to show your appreciation directly, you can donate to my Caramel Macchiato Fund. Thank you and many blessings to you for your generosity!

This website uses cookies to improve your experience while you navigate through the website. Out of these cookies, the cookies that are categorized as necessary are stored on your browser as they are essential for the working of basic functionalities of the website. We also use third-party cookies that help us analyze and understand how you use this website. These cookies will be stored in your browser only with your consent. You also have the option to opt-out of these cookies. But opting out of some of these cookies may have an effect on your browsing experience.
Necessary Always Enabled
Necessary cookies are absolutely essential for the website to function properly. This category only includes cookies that ensures basic functionalities and security features of the website. These cookies do not store any personal information.
Non-necessary
Any cookies that may not be particularly necessary for the website to function and is used specifically to collect user personal data via analytics, ads, other embedded contents are termed as non-necessary cookies. It is mandatory to procure user consent prior to running these cookies on your website.
SAVE & ACCEPT
Scroll to Top
Loading Comments...